Legends of Ninjatown is here! We’re so excited to share it with you through images, info and, of course, awesome products. It’s a lot to digest, but we have a feeling you’ll love it. We’ve alluded to a sort of elemental part of the world of Ninjatown for some time now, both during the 3-year run of Ninja of the Month (eg – Fröst Ninja = Snow Squad) as well as in our award-winning Nintendo DS game (eg – Lava Ninja = throws fireballs). Now we’re really digging deep with Legends of Ninjatown! What is it? View it in the shop page here, and read on…

Welcome to Legends of Ninjatown where you, as an Apprentice, can experience Ninjatown’s rich history and wondrous landscape firsthand. Be prepared for anything—good or evil—and perhaps with enough training you, too, can master the elements and become a Legend.

The Feroshi Squad isn't even really a squad at all, to be honest. Instead, they look toward the FUTURE, where the economy and daily dealings of Ninjatown aren't hinged upon magic and cookies. They want a MODERN ninja society, where ninjas have regular jobs and do regular things. Yes, they're all highly skilled, but the Mayor and his followers want to use such powers to BETTER Ninjatown within – and outside – of its borders. Ol' Master Ninja doesn't exactly – or really at all – agree with this. 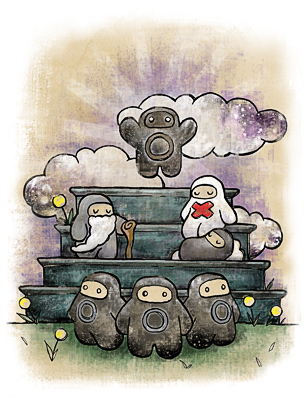 Some accuse the members of this Squad as being archaic and aloof, if not a little sleepy, but they totally disagree. Instead, it’s a matter of focusing on where the heart and head intersect, striving for balance and inner peace. They often know more about the other Squads than the members of the Squads themselves. And if this kind of deep contemplation induces a nap now and again, then so be it!

A subset of the Spirit Squad, the Moon ninjas focus on the nocturnal portion of honor and stealth. Solitary and secretive yet highly spiritual in the old ways of Ninjatown, this Squad knows many things that otherwise go unnoticed by the average citizen. They operate almost exclusively at night, and lurk in the darkest shadows, allowing access to any and all areas of Ninjatown and beyond. Ol' Master Ninja utilizes such skills for espionage and intelligence gathering.

In a word: Passionate. About everything. Sometimes to a fault. Still, these Ninjas have a special role in the Old Ways, what with Baker and Lava Ninja respectively making and protecting Ninjatown’s most valuable asset: The Ninja Star Cookie. These hot-heads call the network of lava canals within Mount Feroshi home, where they can hone some serious fire-power, preparing for any onslaught by the denizens of the Dark Forest. 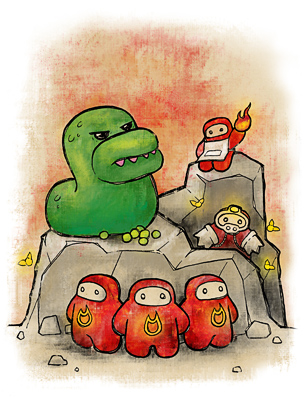 A subset of the Fire Squad, the Sun Squad takes a more fun-filled approach to the otherwise fiery temper of those who consider Feroshi their deity. Summer is the focus, as is everything that comes with it. Beach outings, popsicles, and lots of fun times with friends – unless some Dark Forest baddies come around. Then the Sun Squad goes into Summer slam mode!

Look to the clouds, they say. And when you do – looking past the mountain – you'll see the Cloud Squad ninjas flying high. They don't think all of the pointless bickering going on down on the ground is worth paying attention to. While skilled at identifying threats far away, when they're not on patrol, they are whipping around atop their high-speed flying staches, perfecting the fine art of ninja aerobatics for the gawkers far below.

If the Fire Squad operates predominantly inside Mount Feroshi, the Mountain Squad operates on the high ridges and low valleys all over it. Closely aligned with the Snow Squad – and, in fact, share a deity and their Gorts with them – the Mountain Squad ninjas are hearty and solitary folk with a country twang, but don't necessarily want to live in the harshest environs high atop the mountain's peaks like the Snow Squad. Instead, they can farm, brew batches of Ninjale, and breathe in the fresh mountain air – always ready to spring into action to help their Ninjatown friends far below if need be.

These forest-dwellers are one with the natural world in mind and body. If the Dark Forest is the epitome of bad nature vibes, the Forest Squad brings peace and balance to this vast, untamed place. As guides, they provide safe passage for any traveler who dares venture forth. The Squad, like the forest itself, begets many perplexing questions and mysterious uncertainties. 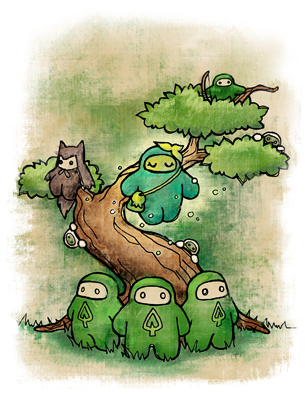 These ninjas tend to be icy inside and out, and are lacking in the usual social niceties. As such, they prefer to keep to themselves, living at the highest elevations of the Feroshi Mountains, away from the daily “annoyances” of the town below. Some say any member of this Squad can single-handedly take on a Yeti Ninja! With a little help from a friendly yet fearsome Gort, that is… 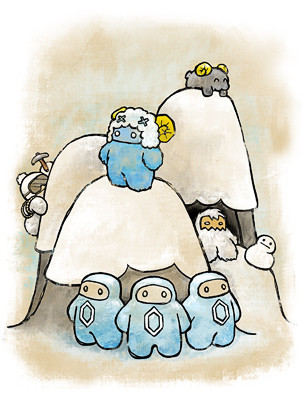 These fierce and agile water-dwellers give serious props to Feroshi’s long-lost cousin Hydroshi, and never seem to get too wrung out even in the most intense situations. Bring them above water however, and they just can’t seem to find their land-legs. Still, at least we know Ninjatown’s plethora of secret waterways are secure from any liquidy Dark Forest badness. 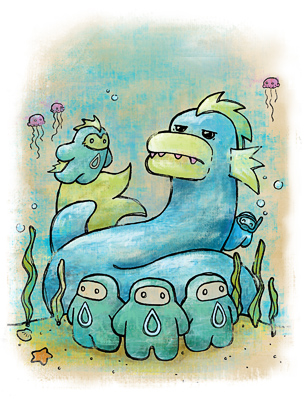 And so much more…

As each Ninja in Ninjatown grows from a Baby Ninja to a full-grown Wee Ninja, they go through a transformation literally and figuratively. Each Ninja will choose a Squad and start training accordingly. As their skill develops, they earn that Squads symbol and the color of their “robes” changes. As this color develops, a Ninja’s true path can reveal itself – sometimes as a surprise to themselves and their Squad Leader. All things considered, Legends of Ninjatown is as much about the history of Ninjatown as it is about YOU identifying with a certain Squad. Do you have a fiery personality like the Ninjas in the Fire Squad? Are you silly and playful like those in the Aqua Squad? Or in short, which Squad are you?

You may have noticed some of the Ninja of the Month releases designated as Original Ninjas. Seldom seen, they are basically Deities in the Ninjatown world, ancient and wise, and are revered as spiritual leaders. Each Squad has its own Deity, most of which are Ninjas except for Feroshi and Hydroshi, of course. They break down as such…

Since the Deities aren’t quite present in the traditional sense, the Squads do need someone to guide them on a day-to-day basis. And while Ol’ Master Ninja is happy to help, ultimately Squad Leaders know the ins and outs of a Squads strengths and weaknesses. The Squad Leaders, all of which you may have seen before… For example, Animal Spirit Ninja is the Leader of the Forest Squad, whereas our most-recent release Polar Ninja is the Leader of the Snow Squad.