Sunny skies, lush forest and rolling hills combine to form the land known as Ninjatown where adorable and honorable Ninjas populate this vibrant yet peaceful place. However, after the mysterious eruption of a nearby volcano, Ninjatown is attacked by hordes of sinister enemies lead by Mr. Demon, who, for reasons unknown, is bent on destruction. It is now time to use each of the Ninjas’ unique skills and powers – even the Ol’ Master Ninja comes out of retirement to fight off the evil and secure Ninjatown, one district at a time. 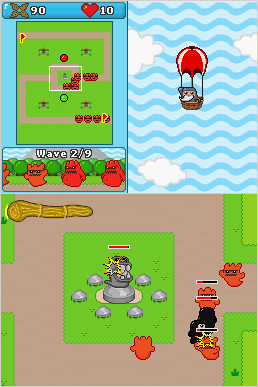 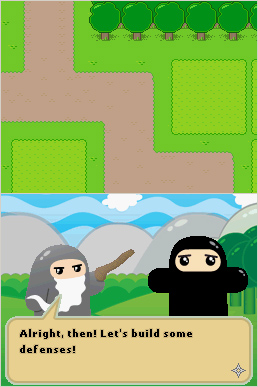 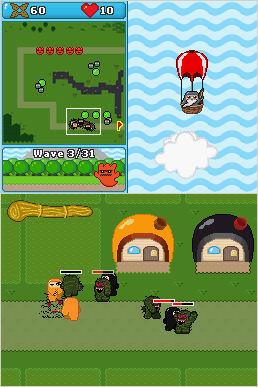 “Don’t let the cutie-pie exterior fool you — Ninjatown is a gamer’s game through and through.”
– Game Informer (9 /10)

“(Ninjatown) avoids the curse of most licensed games and ends up being a great little portable title.”
– IGN (8.7 /10) Editor’s Choice Award

“A very solid strategy game… Ninjatown’s layered in a coating of sickly sweetness that no amount of scrubbing will ever get out of your DS slot.”
– 1up (B+)

“Ninjatown is bursting with charm and personality and it’s found the perfect fit on a system that is just as original and unique…it’s brimming with personality.”
– GamePro (4 /5)

“If you love strategy games, forget about everything else and just play it… A must-have for strategy game fans everywhere.”
– GameZone (9 /10)

“While most people may have seen the previews for Ninjatown and thought the art design was adorable, I had a more personal interest in the progress of the title.”
– Destructioid (8/10)

“It is delightfully challenging, has a clever script, adorable characters, lots of unit options and special abilities which can single-handedly turn the tides of battle.”
– Gamertell (4.5/5.0)

“The game also does a good job of easing you into the gameplay, making it perfect for RTS newcomers. You can even do multiplayer…”
– Gaming with Children